You are at:Home»Tutorials»Mixing First Aid For EDM

In this tutorial, I will show you a simple and very basic mixing technique/approach which may help you to create ok sounding mixes. I’m using it every time I mix my own music and I’ve been quite satisfied with the end results. (If you’ve been watching my tutorials, you’ve probably seen me using it many times.)

Here’s an example. Mixed with this technique.

This technique is no secret: it’s the very first step you take in the mixing process, but very important nonetheless. And I’m talking about setting the volume levels between different sounds in balance.

When you make music and are in the middle of inspiration, you probably throw in all kinds of sounds and instruments to the mix and set their volume levels roughly in balance (at least that’s what I usually do). And the mix may already sound quite alright at this point.

However, the following method MAY help you to make it sound even better.

Try this: at some point in your producing session, take a short break to let your ears rest & recover a bit. This is important because hours of continuous music listening (especially on higher volume levels) makes your ears (or brains) tired and you just don’t hear things in the same way you do when your ears are “fresh”.

Next, after the break, get back to your mix and leave your kick drum volume level to 0.0dB, but drop all the other instrument volume levels to INF (silent).

Play back your mix (only kick playing) and adjust the volume levels of your monitors (or headphones) so that you can hear the kick clearly.

Next, start increasing the volume levels of your other percussion sounds: clap/snare for example. If you have a standard four-to-the-floor beat where the clap/snare is hitting on every other beat, listen it against the kick and increase it’s volume level so that you can hear the clap/snare clearly, while not letting it go over or drown the kick. Make sure you can still hear the ‘snap’ of your kick and that the whole kick is still the most prominent sound in your mix.

Of course, you need to let your ears to be the final judge how you set the exact levels. But listening everything against the kick is a good basis.

Also, if you wonder: why drop the sounds to INF and start mixing from there and why not just start straight from the rough mix and decrease the levels when needed? Well, it might be easier approach for your ears. Of course, you can mix anyway you feel comfortable with, but I’ve personally found I get better results doing it this way. I think mixing from silent to louder makes it easier for your hearing/brains to adjust to the changes and stay in balance than doing the opposite. At least try it.

Now, while this tutorial is focusing just on the volume levels, I DID use a little EQ on the clap/snare sound. I rolled off the low end and boosted the mids and highs with the mixer track EQ.

Ok, back to the subject.

Continue mixing in your percussion sounds: closed hihat perhaps. How loud your closed hihat should be? Again, listen it against your kick. Set it to a level where it is supporting your kick instead of competing with it.

After your kick and percussion sounds are in balance, you might want to mix in your bassline.

Bass is one of the hardest elements to mix in EDM because it is usually working largely in the same frequency area as your kick. But even so, you need to begin by setting it’s volume level. Again, focus on listening your kick and increase the bassline level to the point where you can hear it clearly, but not letting it take over the kick.

Now this is where you usually may encounter a problem: as the bassline is probably the next most important thing alongside kick in EDM, you would like it to be heard clearly in the mix, but if it’s a low end heavy bass sound and you raise it’s volume level too much, it will mash with the kick and you experience all kinds of artifacts such as loosing the punch, muddy low end, clipping, etc. This is where you usually need to start consider whether to use sidechain compression, EQ, change your bass sound to something different, etc.

Here’s a one way to cope with this without using tons of EQ or compression: pay attention to how you sequence your bassline. Don’t place a note to places where your kick hits. Here’s an image of an example sequence (this is the sequence I am using in this example song): 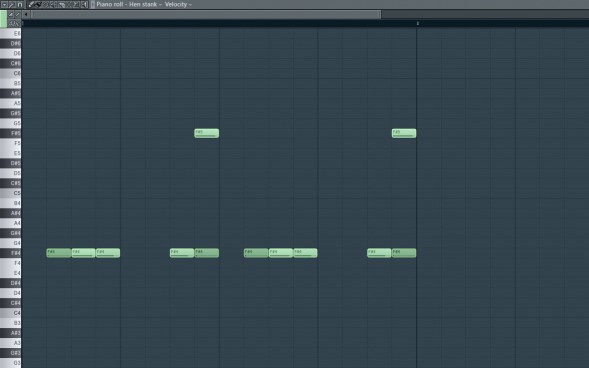 And as you noticed, I didn’t use sidechain compression or any other methods in the basslines mixer track at all. Just a certain type of sequence and setting the volume level in balance with the kick was enough.

Next: the (possible) supporting sounds for the bassline. Of course, you may don’t have those in your mix, but often times you may layer sounds played on higher notes and other sounds with a very light low end or no low end at all on top of your bass sound to make the bass melody to be more prominent. How to mix these kind of sounds? Again, listen to the kick, but this time also pay attention to your bassline. Don’t let the supporting sounds take over your kick and bassline. Make them support.

Next, the lead sound/melody (if you have one, but usually there’s some sort of dominant melody theme line in the mix). How to mix that? If it’s something that is essential part of your song, don’t leave it on the background. Instead, bring it on front. So again, while listening to your kick, try to bring the lead on a par with it while avoiding burying it.

Now, while you mix, you might experience clipping in your Master track. If that happens, just drop the Master track volume level fader few dB’s and increase the volume of your monitors/headphones to compensate.

So in a nutshell: finding the balance between the sound volume levels in your mix is very important. Often times, if you have choosed a right set of sounds and samples, you may don’t need to do a lot of EQ’ing or other processing to make your mix sound good. And remember, try mix everything against your kick. Let the kick rule!

Watch the video version below and download the .flp file:

Download Mixing First Aid .flp (Requires FL Studio 11.0.4 or later to open properly. Note that you are free to use the .flp project any way you like!)

This site uses Akismet to reduce spam. Learn how your comment data is processed.