The Alesis SR18; a super simple box that gets the job done, without blowing a hole in your wallet. This robust piece of gear is designed for those who just can’t afford to splash ridiculous amounts of cash but still want professional results.

Released in 2008, this drum machine, as Alesis correctly put, is “consistently among the top-selling drum machines in the world.” It’s small, lightweight, and has phenomenal reviews from customers. Using audio from studio musicians as opposed to being programmed really hits home with true classic-style lovers.Sound like you? 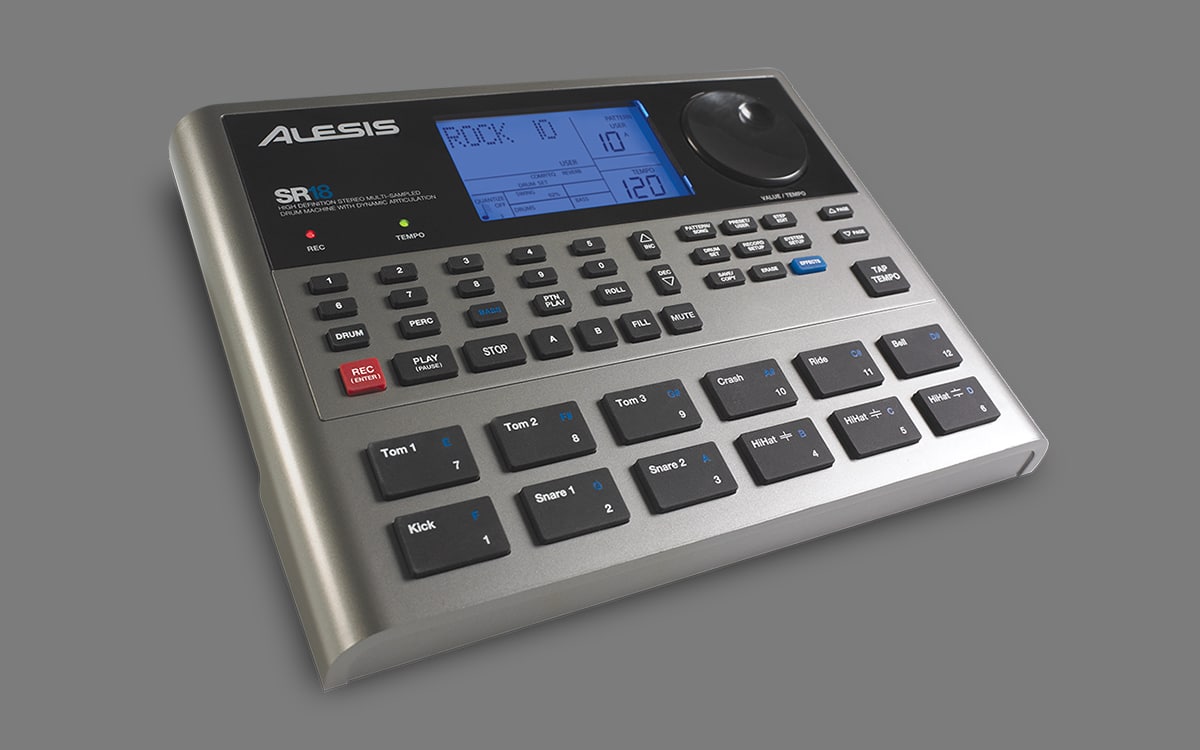 If you aren’t already familiar with the Alesis SR18, the guys over at American Musical Supply whipped up this speedy video run-down.

In the year of 1980, Alesis was founded and left it’s mark in the world of music technology. With low cost and high value, their products allowed beginner musicians to dive into the production of their very own compositions, with a fraction of the cost of their competitors. In fact, the world’s first professional 16-bit effects processor under $1000, the Midiverb, came from Alesis.

Later, the company moved onto producing studio quality drum machines, including the SR16; the predecessor of the SR18. The SR16 dominated the market for a solid 20 years, allowing newbies with a bedroom “studio” to drop pro, organic sounding beats with not much experience needed.

Feel like checking out the full company story? Find it here.

So, how does the SR18 compare to the classic SR16? Honestly, not that much changed; if it ain’t broke, right? Either way, let’s quickly run through the specifications and features.

What could they possibly change to improve an already beautifully simplistic box like the SR16? Well, for starters, a few additions have been implemented. For example, the screen comes with an LCD backlight, which can be a lifesaver for when the stage lights go down, and you can’t see what you’re doing.

Something I am very much a fan of is the optional use of 6 AA batteries to power the machine, making it an obvious choice for on-the-go musicians. Don’t worry; you can still use the provided wall adapter, too!

Another shift in physical design is also present. On the SR18, Alesis use what was the volume dial, as a data wheel to cycle through a catalog of preset patterns, and more. It has 100 preset patterns, and 100 save slots for you to fill up with your musical creations, double that of the SR16. You can even use Pattern Play Mode to trigger patterns straight from the pads.

Also, the volume wheel is now much smaller, and in a rather awkward position on the back of the box, meaning a tilt of the device is needed to adjust the volume. Also new to the SR18 is the tap tempo function, meaning you can make beats the way you want when you want.

At the loss of another MIDI port, there is now a 1/4″ instrument input jack, allowing you to jam along to your saved custom-written patterns. This nicely complements the 2 new instrument layers; percussion & bass. Obviously, the drums layer is also present. With over 500 drum and percussion sounds, and 50 bass sounds, Alesis are making the most of the SR18’s doubled polyphony capability and huge 32 megabytes of internal memory. The percussion sounds are very alike to those of the drums but do provide a change, either way.

I can feel you waiting in anticipation, thinking: “tell me about the bass!” It’s time to do just that. Rather than being a bank of sounds, like percussion and drums, the bass “kit” is comprised of 50 synth pitches, with a three-octave range, spread across the 12 velocity-sensitive pads. With the help of the mute/solo function, you can pick and choose what you hear by holding down the button in accordance. This is super handy when trying to single out that one noise when you’re unsure what it is.

One of the main additions to the SR18 is the real time Alesis effects, consisting of EQs + compression, which have to been categorized together under one device, and a reverb, which has, mostly, pretty obvious, in-your-face effects. Apart from the heavier reverb presets, there are a few more discreet options that are a bit more useable if you will. The effects, overall, are rather tokenistic; with low-customizability and not a giant amount of presets to choose from.

We’ve talked plenty about how it sounds, but if you haven’t heard for yourself, it’s time to check out a demo of the SR18 in action.  Here’s a couple of videos of the the sounds and operations.

There’s plenty to be positive about when it comes to this powerful little drum machine. Then again, you’re not overwhelmed with features to be picky about.

Alesis are always striving for musical greatness, without the horrifying price tag. It’s a superb, robust machine, that does what it says on the tin, and it does it well. With the addition of the effects talked about above, the SR18 was a chance for Alesis to compile everything that their customers wanted from the SR16 into a new, improved machine.

With the inclusion of battery compatibility, this isn’t just for home-recorders any more; time to take to the streets, the subway, or wherever you so, please.

Essentially, this box sets a new bar for everything apart from the cash damage, making it a sensible decision for all, and to say that it’s still up there with the best, nearly a decade later, says a lot.

As I’ve said, with such a simplistic aim, there isn’t much to criticize at all. Scrolling through reviews on Amazon, eBay, and Youtube, a lot of people are slightly frustrated with the placement of the volume knob. This isn’t a dire issue, but it’s something customers are talking about.

Multiple people have also claimed that by squashing so many options into the menu, it’s often easy to get lost in an array of presets. Customers advise that you check the manual before diving in head first. Some pro-players are also upset that 100 pattern save capabilities just aren’t enough for what they want to achieve.

Apart from this, the only reviews below 4 stars, out of 5, are the ones that were broken in the mail, which happens with any company.  If this were to happen, it’s very simple to send the product back and have it replaced.  Definitely an inconvenience but not something I would consider a deal breaker.

All in all, I feel the Alesis SR18 suits an array of needs for a huge market of musicians and could be perfect for a beginner to take them to new heights of musicianship. It’s also great for acoustic players to throw themselves into the drum machine world, and discover a new way of laying down beats, with much more versatility than an acoustic kit.